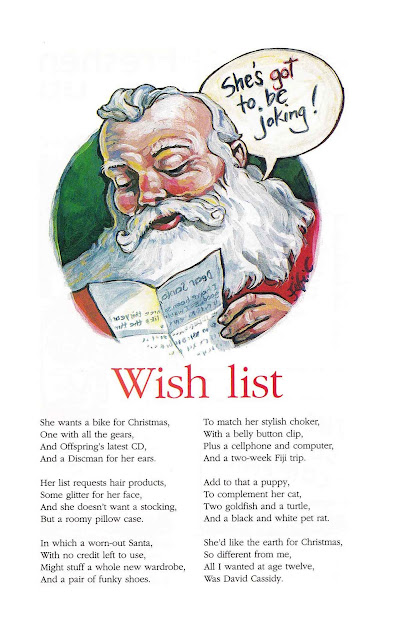 With the Christmas and the New Year coming up shortly I pondered my last post for 2010. Should it chronicle the highs and lows of my year? If you are a follower of this blog you’ll know all of those, and if you don’t, trawl back and have a gander through the past 12 months of the creative life of Fifi. I won’t spend any more time rehashing the already blogged. There is only one more thing I’d add to my news and that is: the stars have aligned and I have achieved the never before made possible- a Creative New Zealand Grant. And just in the nick of time. Now I can look forward to making a damn fine job of illustrating an ANZAC book by David Hill in 2011 free of irritating distractions...like how to pay the power bill and buy groceries for the week. Because it’s been a lean old year in our household, as it has been for many New Zealanders.
Which brings me to Christmas and the worship of Santa, the patron saint of Advertising. Now that we have adult children (the last teen turned 20 this week), we are spared the pressure of ridiculous over consumption at the most financially precarious season. How have we managed this? This weaning off consumerism? Simple. They’ve both flatted this year and have really understood the meaning of cash flow. Its Pam’s and Budget everything and they have a distinct appreciation of what is absolutely necessary to live. Food, shelter and washing powder are critical, iPhones are not. Our son has put in a vegetable garden at his flat. Our daughter made a sandwich each day to take to Uni. Clothes come from op-shops (much more groovy than high street) and walking is a healthier and cheaper option than catching the bus. They both work as well as study. There’s no expectation and lots of appreciation for when we are able to treat them to things. They’ve grown up. It’s lovely.
Ten years ago I wrote the above poem for Next Magazine for my monthly column. Our daughter was still a child. Take heart if the wish list pinned to your fridge trails down and across the floor tripping you up as you reach for the visa card. They do change; especially if you don’t indulge every whim for fear of pouting.
Have a safe and happy Christmas, and let’s welcome the new decade in as one of positive change, growth and abundance.Love to all who read my blog and give me such positive feedback, may your hopes and dreams become reality xxx Fifi
Posted by Fifi Colston at 2:56 pm 2 comments: Links to this post