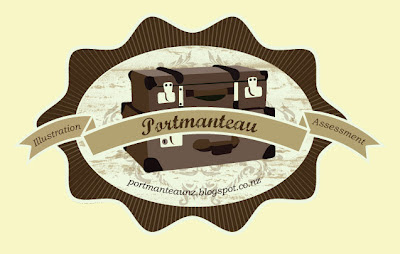 
I've been an illustrator for a long long time. I trained at Wellington Polytechnic (now Massey University) have been a commercial illustration for advertising for 32 years and a children's book illustrator for 28, tutored illustration at Christchurch polytechnic and Massey and well...I know a few things. So does my colleague Adele Jackson. Between us we create illustration for trade and education and are often asked by people wanting to  get published if we can look at their work and give some direction.

We've called it Portmanteau and you can visit us here and find out what we are all about and what we can do for you.

We are committed to having the very best illustration out there in the world. So if you want yours to stand out and get noticed, we can help you take it out of the bottom draw...or suitcase!


Posted by Fifi Colston at 12:39 pm No comments: Links to this post

Having a Grimm Time!

UPDATE!
My story got a mention in the Listener! from the highly respected and wonderful Kate Di Goldi.
"so I’d like to commend several other stories: Jeri and Del, for its economy and wit and re imagining of the witch as a producer of reality television..."

How cool is that?!

Well, I didn't win the Goethe Institute Grimms fairytale competition and I guess we will find out shortly who has, although nobody I know that entered did (and just about every children's author in NZ had a go!). I wasn't expecting to win at all (no really truly). I wrote it because writing for a competition gives you a really good end point to write for and I have always been deadline driven. Speaking of deadlines I have a book to create for Scholastic by the end of February. Really exciting and I can't really say any more than that except I might have been working my entire creative life to do this book. It's that perfect a topic for me and no, it's not about sauvignon blanc!

Jeri and Del
(based on Grimm's 'Jorinda and Jorindel')

Once upon a time, in a large field near the River Hutt, there stood a tall tower that dominated the land as far as the eye could see. It was cold, grey and imposing and it was known to all as Avalon.
The tower was ruled by a fearsome witch. Her lips were red as blood, her fingernails sharp and she had a hooked nose that no amount of surgery had managed to fix. She wore her black streaked hair in an exquisitely styled bob and designer clothes only ever graced her back. Her many servants did her bidding in fear, lest they might be put under the axe.

The witch spent her days concocting new formulas by which the ordinary folk might be drugged. They had strange and curious names like 'The Stars Do Dance,' 'Masters of Banqueting' and the most stupefying of all; 'The Hapless Apprentice.' With these she could control and influence the hearts and minds of simple people and consequently dine with the rich and famous. With the aid of her alchemists, sorcerers and the company accountant, she had devised a new and more bewitching enchantment and named it 'Aoteroa Hath Talent'. With it she would be able to capture artless maidens and callow youths then starve and control them until they were slim, stylish and sang like nightingales. They would then be signed up to contracts that would keep them slaves to the Tower forever and make her a real rich witch.

One day, a pair of young lovers, Jeri and Del walked beside the river, picking daisies and sharing a cigarette, which were precious in this land since the King's Treasurer had increased the taxes.
'I love you so much Del,' said Jeri as she exhaled, 'I want to hang out with you forever and one day maybe like, get a pet?'
Del tucked her tiny hand into his and carried on texting with his other. The rumble and hum of horsepower on the Autobahn beyond was suddenly broken by a sweet sound filling the air around them.
'It's Lady Gaga!' said Jeri, 'I so want to be like her!'
Del stopped texting and listened to the music.
'It's coming from over there,' he said pointing to the tower.  Jeri pulled his hand.
'C'mon, let's go!'
Del shook his head, he stood rooted to the spot; he still hadn't finished his filter tip.
'Don't go near that tower Jeri, nothing good ever came out of it,' he warned.
'But listen to that, it's awesome!' Jeri said and let go of his hand. Del watched as she ran towards the music and he knew that she was lost to him. He could neither weep not speak, so he texted his mate Zach Ruru and asked what he should do. Now Zach was a wise young man and said : bro git a puppy, chicks luv dem

So Del set off to the Olde Animate Shoppe to find a canine that might win back the heart of a star struck maiden. He wandered through the door, past guinea pigs in foul smelling straw, sly kittens clawing carpet covered poles and turtles like rocks in their warm watery tanks, until he came to the dogs. There was a hairy beast with teeth as large as dragon fangs, a sleek hound baying for biscuits and a fat poodle with clan tartan coat, but he could not see a pup in sight. At last Del managed to attract the attention of an assistant. She was stout and kindly and reminded him of his grandmother who had been eaten by the wolves of Social Development long since.
'I have but one small dog' said the woman, 'and it is very special with the power to charm all but the hardest of beings.' She reached inside her fleece and pulled out the tiniest pup imaginable, with ears like a bat and eyes like huge black baubles. It wore a pearl studded collar and trembled in the harsh light.
'Gross, it looks like a rat,' said Del.
'Hush, 'said the woman, 'it's a girl thing. One look into this dog's eyes and any one you desire will follow you to the ends of the earth.'
As she handed the minute animal to Del, she told him 'Her name is Daffodil and you must be very, very gentle with her: she has a fearsome bite.'

Del paid the woman all the money he had saved for a new spoiler, tucked the dog into his hoodie and journeyed off towards Avalon. The gates of the tower were heavily guarded by the witch's henchmen. Nobody could enter without a golden pass, which were kept on guard's belt. Del heard music coming from inside the tower, but outside people wept and moaned and threw themselves onto the ground in despair.
'Why?' they cried, 'oh why are the judges so cruel?'
Del was terrified of what might be inside; wizards, torturers and makeup artists, but most especially the powerful witch. Summoning all his courage he walked up to the gate and took Daffodil out of his hoodie and showed her to the guards.
'Awww!' said Lars, the fairer of the two, 'Who's a bootiful widdle puppy den?'
Whilst Lars played with Daffodil's ears and kissed her little nose, Del was able to lift a golden pass from the guard's belt.
'Pass!' barked Ralf, the other guard. Del showed him his card of gold and was let inside the gates. He followed the music up a long corridor until he came to a green door. From behind it came moaning and wails and the occasional right chord. He was sure Jeri was in there but as he turned the handle, a chilling voice said behind him,
'Have you come for the audition?'
Del turned and found himself staring into the bloodless face of the witch herself. She poked him with her sharp finger. He thrust Daffodil at her, rather too roughly and the dog snapped, biting and tearing at the witch's hands, ruining years of expensive manicures. Whilst the witch screamed and called for her guards, Del yanked open the Green Room door. Twenty five surprised maidens and a few buff young men turned to look in surprise. The wailing stopped as they swallowed back their song practice.
'Del! What are you doing here?' asked Jeri, walking to the front of the crowd wearing nothing but small silver shorts and an inappropriate tee-shirt.
'I've come to save you!' said Del, 'from yourself!' he bent down and picked up the dog who had finished savaging the witch outside, 'and, I have bought you this.'
'You'll need more than that' said Jeri, ignoring the dog, 'I've got through to second round!'
Del looked at her and realised they would never live happily ever after, not whilst she had a microphone in her hand. He turned to leave and bumped into Lars who was daubing the witch's hands with Dettol.
'Here,' he said, handing the little dog to the guard, 'her name is Daffodil, you can keep her.'
As he walked back up the corridor, he heard Lars running to catch up.
'Wait,' shrieked the witch, 'come back to me this minute.'
'No!' yelled Lars over his shoulder, 'I'm going with him.'
The witch screamed at him and demanded to know why her faithful servant would leave her.
'Because, now I have Daffodil,' replied Lars, 'and you don't bring me flowers anymore.' 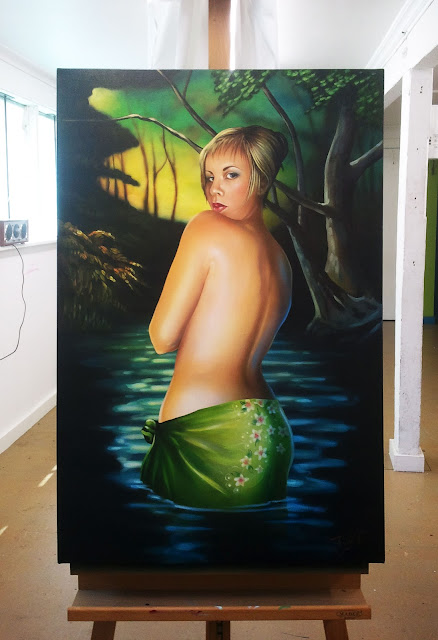 So only two more days until Northwrite! and I am busy preparing my workshops so we all have a spectacular time, get really energised and come away with new vigour around writing, illustrating, presenting, social media and the world of story (I'm doing the illustration and presenting bits!)

What we won't be doing is painting portraits like this one; a commission in the style of J.H Lynch  If it was an illustration masterclass like my dear friend and wonderful children's book author and illustrator Ruth Paul went to in Boston, then we might be! (lots of fantasy art there!) However, if you are about in Wellington on Saturday 3rd November, you have a chance to hear Ruth talk about her experience there at a special Illustration seminar that the Wellington Children's Book Association is putting on.

We will have great guest speakers talking about children's book illustration and myself and the fabulously talented Adele Jackson will be introducing Portmanteau; a new illustration assessment service we have set up (more to come on that next week when the site goes live!)

Posted by Fifi Colston at 12:47 pm No comments: Links to this post