I've been doing my annual studio clean up - this most often in results a new location and this year- a wall ripped out between 2 rooms of the house to create my ideal space. It won't ever be perfect of course, because my needs are small when it comes to fancy cars and luxurious holidays, but vast when it comes to accommodating hoarded inspirations and materials. I think the average creative person could live quite happily in a huge warehouse with one small bed in the corner, a couch and a rudimentary bench for cooking purposes, with the rest given over the work tables, drawing boards, computer gear, spray booths and a lot of book shelves.

I was cleaning out said shelves a couple of days ago- being ruthless with my collections of art, fashion, design and vintage books, managing only to get rid of a small box of things others have given me and I was not much attached to, when I found this. 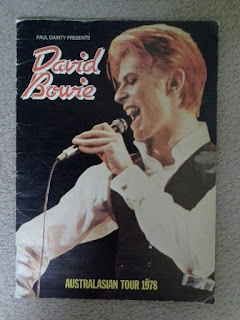 I have kept it for 37 years, my memento of the first rock concert ever I travelled to outside of Wellington, on a road trip. My buddies, Carla, Jo and me, all dolled up our New Wave best.
We were design students at the end of our first year at Wellington Polytech. We bought tickets; they may have been $22 each. When you could rent a room in a flat for that including expenses, that was a big investment. There was no thought about how we would travel, where we would stay and what we would eat. Bowie was the thing and all else, minor detail.

A few days out, Jo came up with a way of getting there, a lift there and back for 3 girls with a radio disc jockey ( she knew everyone). Sounded good, exciting even, so we rocked up to the ferry to meet him on the appointed day. I can't remember his name but to say he had a face for radio was entirely accurate. I won't go into finer detail, but his obvious expectations of a three, or was that four way? romp in Kaikoura on his expense account with nubile groupies, were dashed at the first offer of drinks in the ship's bar. Ewwww...we thought him ancient; he was probably only 30. We were saving ourselves for Bowie, metaphorically you understand.

The DJ dropped us on an early Canterbury evening (somewhat grumpily) in The Square. We had no idea where we would doss down for the night; the nearest camping ground was miles away and besides, we hadn't bought tents. The Christchurch Square, back in 1978 was an intimidating place with The Doghouse Burger joint being the main attraction. We feared we three gals in a phone box might become the New Objects of Desire if we didn't come up with a plan soon. We scratched our heads and thought. All we could come up with was Golden Years.  Then Jo had a golden moment of clarity:
'We could call my aunty...'
'You have family here?!'
'Well yes, but mum said I was only to call her if we were desperate.'

Carla and I looked around at the inhabitants of the Square. We couldn't imagine a more desperate situation. Aunty was called and in no time at all, a BMW arrived with Jo's cousin waving out 'Hoorah!' and we were transported to the poshest of houses in the swankiest of burbs and made welcome within an inch of our student lives. Whilst Jo was interrogated by her aunt for family news, Carla and I fell to our knees in grateful thanks at the altar of hot showers and fluffy duvets.
D day dawned- David! We'd see him, in the flesh, the Man Who Fell to the Antipodes.

Jo's cousin drove us to Queen Elizabeth II Park. Incongruous, stepping out of that beamer in our carefully ripped tights. We were in our finest semi punk arty attire. I wore a pair of green lurex leggings, a tiny tee, a black dinner jacket festooned with badges and vintage brooches and op shop stilletos from the 1950's. I was all set for a day and night on the stadium turf. We found our tribe; the others from our design school year and settled in for an afternoon of waiting for the coolest man (possibly alien) on earth to make his appearance. Jo was hopeful of a backstage pass.

The concert, when it happened, was a blur in some ways. Ask me to remember exactly the order in which anything was played and I couldn't tell you. Bowie was dressed in a jumpsuit and there were banks of lights and at one stage he was annoyed with people- something to do with waving fists. I didn't understand; I thought we were all being nice. I had yet to learn the word Fascist. I think I blacked out for a bit at some stage- blame the hours waiting in the sun doing what young people do to pass the time (Scrabble, Monopoly...) I was held up by the crowd, Station to Station chugging backwards and forwards through my whole body. I couldn't see much and some kind biker guy gave me his helmet to stand on. No mean feat to balance on one in stiletto heels. He was very chivalrous- I surely must have left dents in it.

When the show was done, we tottered off, happy and filled up with the joy of seeing our hero live on stage (which is whole lot better than being dead on it). We were all art students and he was an artist, and in our wildest fantasies, we could be him, because he was all of us. Girl, boy, actor, writer, performer, comedian, visionary and sexy, oh so sexy! Nothing at all like a Wellington DJ in his beat up Citroen. We could all be heroes one day; the world at our feet, for ever and ever.

I got home to the Fendalton pad that night to find almost all of my badges and glittery things had fallen off into the grass at the concert. Trodden into the ground, maybe even embedded in that motorcycle helmet? 'Disco Sucks' underpinned with a Diamante dog. I like to think that they are still there, buried in the soil, swallowed by the earthquakes, waiting for an archaeological dig. Little offerings from my pilgrimage to the first rock god I truly adored.

Post script- we know what happened to David, I was shocked when my daughter broke the news to me in a gentle phone call, before I saw my news feed. But what happened to us, the fans of '78?


Well two of us are working artists, me doing what I do, and Carla is a brilliant illustrator as well as choreographer- here is her website http://www.scruff.co.nz/


Jo, the beautiful well connected girl who looked like Nastassja Kinski, travelled the world, was a gifted photographer but sadly passed away from breast cancer not so long ago. I like to think that she finally meets Bowie in another dimension, when the line of fans clear and he is standing by the wall.

Posted by Fifi Colston at 1:16 pm No comments: Links to this post